HISTORY AND DEVELOPMENT OF THE INSTITUTE

The growing need of human resources man power in variety of schemes of agricultural significance of the State Government had been realized in late 50’s. In order to overcome the shortage of agricultural graduates, the subcommittee on agriculture and allied personnel recommended an increase in admissions to the existing Agricultural Colleges at Bapatla and Hyderabad. The state manpower committee appointed by the Government of Andhra Pradesh also felt the need for more trained personnel in agriculture, emphasized to start a new college and recommended the constitution of a committee to decide upon the location of the third Agricultural College in Sri Venkateswara University area as the other two colleges at Bapatla and Hyderabad were located in Andhra and Osmania University areas, respectively.

A committee consisting of Sri D. V. Reddy, Director of Agriculture,  Sri C. Anna Rao, Executive Officer, Tirumala Tirupati Devasthanams and the Chief Engineer (Buildings) was entrusted with the task of choosing a site in the Sri Venkateswara University area for locating the College. The Scheme for the establishment of the College was prepared by then the Principal of the Agricultural College, Bapatla, incorporating the experiences gained in the establishment of that College fifteen years earlier.

Establishing the third Agricultural  college at Tirupati has been a landmark in the history of Agricultural Education in Andhra Pradesh. Besides, meeting the personnel requirements of agricultural department and other technical departments of Govt. of Andhra Pradesh,  the college also served as centre of Excellency in the development of trained human resources required in the field of agriculture who can serve the farmers in mitigating agriculture related potential field problems.

Sri Nukala Ram Chandra Reddy, Hon’ble Minister for Agriculture, Govt. of Andhra Pradesh laid the foundation stone for the College and hostel buildings on 27th October, 1961. The college is located at the foot hills of the sacred Tirumala Hills in an area sprawling over 360 acres in a serene rural setting which is quite refreshing and splendid. Initially the college was financially supported by Tirumala Tirupati Devasthanam (TTD) who had donated a sum of Rs. 4.0 lakhs and Rs. 2.0 lakh donation by Sri. Ramakrishna Raju, a philanthropist and business man, Bombay.

Sri C. Krishna Moorthy assumed charge as first Principal of S.V. agricultural College, Tirupati  on May, 1962 in a temporary room in the administration building of the Sri Venkateswara University. He was later joined by other teachers in July, 1962  to impart instruction in the subjects of the second year of the degree course viz.,  Agronomy, Botany, Chemistry and Entomology. Instruction in Engineering (Civil) was imparted at the S.V. Engineering College and Animal Husbandry at the Veterinary College, Tirupati. The field practicals were conducted in the leased farm at Avilala village near Tiruchanur. The list of principals / Associate Deans of the college is furnished in Appendix – I

The foundation stone for a second hostel to accommodate 240 students, of two blocks, one with single rooms and the other with three seaters, was laid by the Vice-Chancellor Sri O. Pulla Reddy, on 10th September, 1966 and was inaugurated by Sri K. Brahmananda Reddy, the then Chief Minister, Andhra Pradesh.  The inauguration of these buildings marked a definite stage in the growth of this institution. It had by now acquired not only most of the physical facilities required for implementing the Under-graduate teaching programme but had also developed to such an extent as to press its claims for the institution of post-graduate programmes in several disciplines.

Consequent to the report of the Commission headed by Dr. G. Rangaswamy, Dean, University of Agricultural Sciences, Bangalore, a decision was taken to start  the programme of Post-Graduate instruction of the off-campus Colleges at Tirupati and Bapatla with effect from the academic year 1968-69. Post graduate programme with Horticulture as the major field was introduced in 1968-69 followed by Agronomy in 1969-70.

In the beginning, the intake of the students at under graduate level was 80 and later in phased manner it was raised to 195. The first batch of 64 graduates came out in 1965-66. The first three batches of graduates (164) were trained in the traditional system of whom 38 students had obtained first class. The next three batches of graduates (241 in number) were trained under the Internal Assessment System of whom  83 of students had obtained their first Class and another 27 had obtained their first class with distinction. Since inception of this college, a total of 3790 under graduate students have passed out from this campus.

M.Sc. (Ag.) course of two year duration was introduced in a phased manner in ten disciplines i.e. Horticulture (1968-69), Agronomy (1969-70), Plant Pathology (1972-73), Extension Education (1976-77), Genetics and Plant Breeding (1982-83), Entomology (1982-83), Agriculture Economics (1984-85), Soil Science and Agricultural Chemistry (1984-85), Plant Physiology (1985-86) and Statistics and Computer Applications (2009-10). A post graduate programme in Plant Protection was introduced in the college during 1983 with Entomology and Pant Pathology disciplines offering a combined course catering to the requirement of the personnel engaged in the state department of agriculture.

Subsequently Ph.D. Programmes were introduced in the disciplines of Agronomy and Genetics and Plant Breeding during 1992-93, Extension Education (2007-08), Soil Science and Agricultural  Chemistry (2009-10), Entomology (2009-10), Agricultural Economics (2009-10), Crop Physiology (2011-12) and Plant Pathology (2012-13). The college was shaped in due course of time by providing a spacious building for laboratories and class rooms for each department. So far, a total of 1217 and 96 students  in M.Sc.(Ag.) and Ph.D programmes, respectively have passed out and are occupying higher and prestigious position in different National and International organizations.

A well-equipped Regional Library building was established in the year 2007 to cater to the needs of the staff and students of the campus. The residential accommodation was also strengthened by constructing four hostels i.e. three (Dwaraka, Sabarmati and Mithyla) for boys and one (Priyadarshini) for girls in the campus. Later, one more block for UG and new PG Hostel for PG girl students has come up. With additional grants of ICAR and state government, new structures such as additional floor to the college and hostel buildings were added to create more avenues to the students and faculty as well. To strengthen the UG programme, further through AHRDP sponsored by World Bank few of the faculty teachers were   trained in advanced fields both at national and International level. The college completed its fifty years of academic excellence by 27th October, 2011. In commemoration of this event, Golden Jubilee Celebrations were organized for one year by conducting different events such as alumni meets, tree plantation, blood donation, special lectures etc. 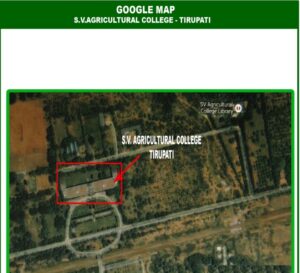 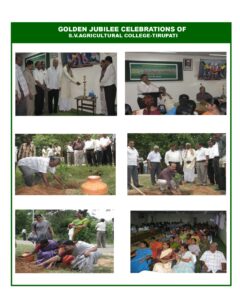 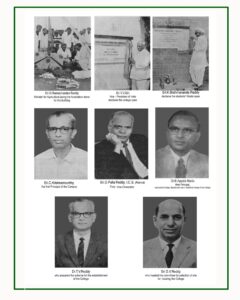